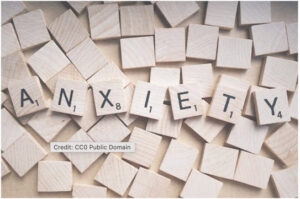 Research states exercise can reduce anxiety events in individuals, but it is not known if exercise can deter this condition from starting.

A Swedish group of investigators published  (Frontiers in Psychiatry) their findings after studying 400,000 long-distance cross country skiers (both men and women) from 1989-2010. They compared them to non-skiers during the same times period. They reported a “significantly lower risk”  of developing anxiety in the long-distance skiers compared to non-skiers. The more physically active lifestyle individuals were at an almost 60% lower risk for starting with anxiety disorders. These findings were found in both sexes.

Interesting, especially me, was the finding that “highest performing female skiers had almost the double risk of developing anxiety disorders compared to the group which was physically active at a lower performance level.” But it was still lower than the development of anxiety disorder in the inactive women’s group. This was not seen in the men’s data analysis.

Questions arise is it long-distance skiing, is it skiing, being outdoors for protracted time, or is it the pure degree of exertion that factors? Will the association of exercise and anxiety vary by sport? Wither exerted indoor or outdoors matters?

More research for sure will follow, especially with a focus on youngsters. Nip this disorder in the bud, so to speak!