Media (especially TV shows) portrays cardiopulmonary resuscitation (CPR) as having an improbable outcome – patient wakes up and shortly after walks out of the hospital without any the worse. 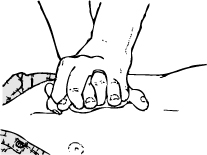 Please remember it IS fiction, in real life the odds of having your heart and lungs restarted after a medical crisis is very slim!

A study by USC Davis School of Gerontology researchers watched popular dramas Grey’s Anatomy and House noting performing CPR successfully saved a patient’s life early 70 percent of the time. Half of the fictional patients who received CPR made enough of a recovery to eventually leave the hospital. That’s ‘almost double the actual immediate survival rate of less than 37 percent and four times the real long–term survival rate of roughly 13 percent’, according to experts in end–of–life care.

Are these the expectations people have upon signing directives for end of life care?

TV programs show CPR performed mostly on adults 18 – 65, while in reality more than 60% of CPR is preformed on those over 65. Then there is the other reality – trauma – which can cause one’s heart to stop. Trauma was the cause in the TV shows in this study for approx. 40% of the CPR, but in real life only 2 % of all CPR is done on trauma victims. The study appeared online in the Journal Resuscitation on Aug. 18.