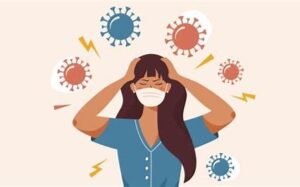 More than 175 million people worldwide have been infected after a year, and over 3.8 million people have died from the COVID-19 at this posting date.

Plenty of data for study and boy have researchers be mining the reports. A review of all publications that studied more than 100 patients for long covid symptoms revealed a slew (50) long-term effects from this viral illness. In total 15 studies were included for this systematic review. There were eight studies from Europe and UK, three from the USA, one each from Australia, China, Egypt, and Mexico. Adults ranging from 17 to 87 years of age were studied. After initially recovering, persistent symptoms can start after 14-110 days. Published August 9, 2021, in Scientific Reports

The review found the five most common symptoms noted were fatigue (58%), headache (44%), attention disorder (27%), hair loss (25%), and dyspnea (24%). It is estimated that up to 80% of recovered patients develop one or more long-term problems. If you have a mild case or severe case it appears from patient symptom tracking that weeks to months later abnormal signs or symptoms can appear.

The lasting effects, at any point in the illness, will not be known and so far can’t be predicted nor guessed. Even what term is used to refer to the condition is so different in the literature. Examples used include: long, post, persistent, chronic, ongoing, post-acute, ongoing.

An agreement must be arrived at, also what precisely defines the condition. In so doing all studies can become more valuable. Questions to be answered include does it just not totally go away? Does one recover totally then symptoms new or similar to illness occur? How do you or medical tests determine you totally recover? If you have a mild case or severe case it appears from patient symptom tracking that weeks to months later abnormal signs or symptoms can appear.

Compounding the inconsistencies within the medical community are all the social media postings by individuals who have ‘recovered’ or ‘not recovered’. Is a negative test equal recovery – end of?  Presence of antibodies in your blood means recovery? No, we are not that naive, this virus starts things/processes within our body that can appear later after our antibodies have neutralized or blocked the SARS-CoV-2 virus. I believe this and that this virus is a trigger itself or our own defenses go a bit haywire. In each of us, it will be different.