An ever-increasing number of drugs, vaccines have found their way into the pandemic medical bag.

Then attention turned to the monoclonal antibodies for those with mild to moderate COVID-19. Early recognition and a quick doctor’s order, followed by rushing to a medical facility got you an outpatient IV over 45 min. These IV drugs target the virus’s spike protein that binds to our cells. Emergency use authorization (EUA) was given to Bamlanivimab, Estsevimab, Casirimab, Imdevimab (given subcutaneously), and Sotrovimab (interestingly this antibody is from a survivor of SARS CoV-1 in 2003). Studies since EUA have found that certain combinations might be optimal. Many fell out of use due to impotency with new viral variants. These ‘monoclonals’ prevent the development of severe disease. Just as the vaccines developed do not prevent you from contracting and transmitting the virus but can keep you from a severe case. We all know the % efficiency changes according to the latest study. What many forget is that not everyone achieves the acquired percentage immunity reported. so now booster vaccines after 6-8 months are recommended. However, if you have had the illness the direction is not clear. 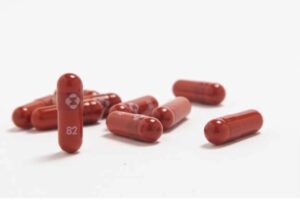 And now comes might pill! This pill, molnupiravir, has been called everything from a “game-changer” to “blockbuster.” A new weapon in the ever-expanding arsenal against COVID-19. The FDA approval could come in a matter of weeks. But is it all it’s been talked up to be? A capsule for those ‘ adults with mild-to-moderate COVID-19 who are at risk for severe disease or hospitalization’ says drug maker Merck. At present, the price is roughly $700 for each course of treatment. According to positive outcome studies actually treats the disease. If your symptoms started within 5 days & you ta=ke this antiviral your chances of hospitalization and the severe outcome are 50% less than if untreated. The worldwide study included the Delta, Gamma, and Mu variants have accounted for nearly 80% of the cases in the trial. all participants had at least one risk factor for poor outcome. A 5-day course of a twice a day dosage of 800 mg. capsule is recommended.

Time will tell if weapons that attack this virus by different means prove to outsmart the enemy.